The Benefits of Music Education

Whether your child is the next Beyonce or more likely to sing her solos in the shower, she is bound to benefit from some form of music education. Research shows that learning the do-re-mis can help children excel in ways beyond the basic ABCs.

Research has found that learning music facilitates learning other subjects and enhances skills that children inevitably use in other areas. “A music-rich experience for children of singing, listening and moving is really bringing a very serious benefit to children as they progress into more formal learning,” says Mary Luehrisen, executive director of the National Association of Music Merchants (NAMM) Foundation, a not-for-profit association that promotes the benefits of making music.

Making music involves more than the voice or fingers playing an instrument; a child learning about music has to tap into multiple skill sets, often simultaneously. For instance, people use their ears and eyes, as well as large and small muscles, says Kenneth Guilmartin, cofounder of Music Together, an early childhood music development program for infants through kindergarteners that involves parents or caregivers in the classes.

“Music learning supports all learning. Not that Mozart makes you smarter, but it’s a very integrating, stimulating pastime or activity,” Guilmartin says.

“When you look at children ages two to nine, one of the breakthroughs in that area is music’s benefit for language development, which is so important at that stage,” says Luehrisen. While children come into the world ready to decode sounds and words, music education helps enhance those natural abilities. “Growing up in a musically rich environment is often advantageous for children’s language development,” she says. But Luehrisen adds that those inborn capacities need to be “reinforced, practiced, celebrated,” which can be done at home or in a more formal music education setting.

According to the Children’s Music Workshop, the effect of music education on language development can be seen in the brain. “Recent studies have clearly indicated that musical training physically develops the part of the left side of the brain known to be involved with processing language, and can actually wire the brain’s circuits in specific ways. Linking familiar songs to new information can also help imprint information on young minds,” the group claims.

This relationship between music and language development is also socially advantageous to young children. “The development of language over time tends to enhance parts of the brain that help process music,” says Dr. Kyle Pruett, clinical professor of child psychiatry at Yale School of Medicine and a practicing musician. “Language competence is at the root of social competence. Musical experience strengthens the capacity to be verbally competent.”

A study by E. Glenn Schellenberg at the University of Toronto at Mississauga, as published in a 2004 issue of Psychological Science, found a small increase in the IQs of six-year-olds who were given weekly voice and piano lessons. Schellenberg provided nine months of piano and voice lessons to a dozen six-year-olds, drama lessons (to see if exposure to arts in general versus just music had an effect) to a second group of six-year-olds, and no lessons to a third group. The children’s IQs were tested before entering the first grade, then again before entering the second grade.

Surprisingly, the children who were given music lessons over the school year tested on average three IQ points higher than the other groups. The drama group didn’t have the same increase in IQ, but did experience increased social behavior benefits not seen in the music-only group.

Research indicates the brain of a musician, even a young one, works differently than that of a nonmusician. “There’s some good neuroscience research that children involved in music have larger growth of neural activity........ Continue Reading

How to improve the school results: not extra maths but music, loads of it

Abiha Nasir, aged nine, walks quietly into the small classroom, takes a seat, adjusts her hijab and picks up the drumsticks. A shy smile spreads across her face as she begins to play.

She was just five when she turned up at Feversham primary academy’s after-school clubs, leaving teachers astounded by her musical ability and how her confidence grew with an instrument in hand. Last year, Abiha successfully auditioned for Bradford’s gifted and talented music programme for primary school children, the first Muslim girl to do so. The assessor recorded only one word in her notes: “Wow!”

Abiha’s teachers say her talent might have gone unspotted in many schools, where subjects such as music and art are being squeezed out by pressure to reach Sats targets and climb league tables.

But at Feversham, the headteacher, Naveed Idrees, has embedded music, drama and art into every part of the school day, with up to six hours of music a week for every child, and with remarkable results. Seven years ago Feversham was in special measures and making headlines for all the wrong reasons. Today it is rated “good” by Ofsted and is in the top 10% nationally for pupil progress in reading, writing and maths, according to the most recent data. In 2011, the school was 3.2 percentage points behind the national average in English. This year 74% of its pupils achieved the expected standard in reading, writing and maths, against a national average of 53%. It is 7.1 points above the average for reading and 3.4 above for writing. In maths, the school was 2.4 points behind the national average in 2011 and is now 6.5 above it. Its results for disadvantaged pupils are well above average. 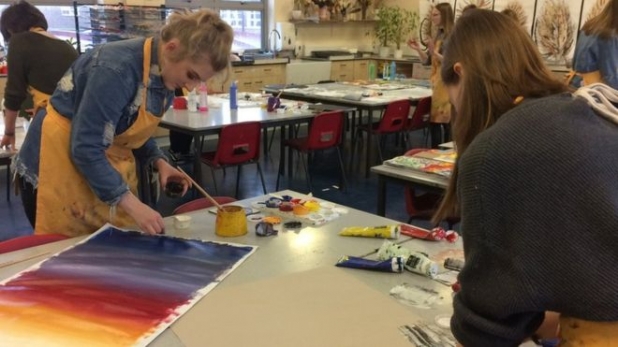